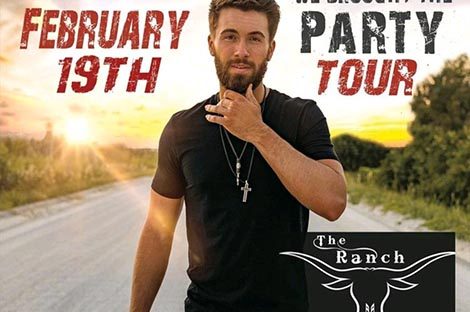 Two years ago I got this crazy idea to drive my truck out to the local Amphitheater, set my speakers up, and play right off the back of my tailgate…I’ll never forget those sunburned, 100 degree summers…that’s where it all really started for me.”

Montgomery was just out of high school when he decided to park his truck in the middle of thousands of country music fans and perform right off the back of his tailgate for the crowd tailgating outside the Coral Sky Amphitheater in his hometown of West Palm Beach, Florida.  Little did he know at the time, that he would be performing on the main stage and in the lineup at one of South Florida’s largest country music festivals inside that very same amphitheater just 2 short years later.

“My debut single, ‘Drop a Tailgate’, is the song that we really LIVED out at those tailgates…”

“From a very early age I was drawn to music…  I VIVIDLY remember begging my parents for a guitar when I was 5 years old… and when I got one… that was it.  By the time I was 12 years old, I couldn’t get enough of writing songs and performing.”

Montgomery writes all of his own songs and at age 22 has officially released twelve songs as an independent artist.  Montgomery currently produces his own music, records with Nashville’s top session players, and works with Nashville’s most talented engineers including F. Reid Shippen, multiple GRAMMY award-winning mixer, engineer, and producer, and Pete Lyman, GRAMMY-nominated mastering engineer.

“When I’m writing a song… I can hear what I want it to sound like…  And when my vision for the song meets the energy of the session players in Nashville… (which are the most talented musicians in the world in my opinion…) something really cool happens… Being in the studio is one of my favorite places to be.”

Although music was always a special part of Ryan’s life, he had other interests as a youth as well.  Growing up in South Florida allowed Ryan to participate in numerous sports and his athleticism enabled him to excel in many including travel ice hockey, basketball, competitive waterskiing, surfing and working out.

“I played sports all growing up… but music was always there for me in my life… And I think whether you’re a fan of music… or someone who plays… Music has a really unique way of making you feel something like no other thing can… It’s there for you at your highest points in life… and it’s there to pull you through your toughest spots… that’s what music has always been for me.”

Ryan was able to successfully balance school, sports and music throughout his elementary, middle and high school years and as he entered college made a decision to focus primarily on both his college education and music.

“I really believe that I was put here on this earth to connect with a lot of people through music… seeing the faces of my audience light up when we come on stage is one of the most rewarding and fulfilling experiences of what I get to do.“

Montgomery has a combined social media following of 125K+ with fans packing his shows and downloading/streaming his music. Besides writing and recording new music, Ryan loves performing and plans for his 2021-22 Tour are underway taking him through Fl, GA, NC, SC, AL, MS, LA, TX, TN, and IL and other U.S. locations.

“Being able to connect with the audience at our live shows… and bring the recorded versions of my songs to life is a really special thing… once we hit the stage and our energy meets theirs… I genuinely wish that we wouldn’t ever have to end the show… I’d love to just keep playing music all night.”

“I want to make music that makes people want to roll their windows down and sing along… to forget about all the craziness in their lives and to just turn a song on and live life for a few minutes… that’s why I do what I do… and that’s what I believe music has the power to do better than anything else.”